The Office of Interchange oversees operations at The Crossing, a doorway between two formerly identical dimensions. The OI is the setting for much of the action in the new Starz Original Series Counterpart.

In 1986, during the Cold War between the United States and the USSR, there was an accident during an experiment in the USSR-controlled area of East Berlin. At the time, the universe split into two identical copies (Dimension One and Dimension Two).

While identical in every way at the moment the Crossing opened and for several years after, the two sides hit The Break and diverged significantly after that.

The location of the accident, now known simply as "The Crossing", became a nexus point allowing travel between the two dimensions

The Office of Interchange is apparently overseen and financed by the United Nations. While Peter Quayle says he believes most world leaders in D1 are unaware of its purpose, the OI is described as a UN agency in much of the early marketing for the show.

Personal technology is restricted inside the Office of Interchange. All employees surrender their smart phones shortly after passing through the first security checkpoint in the OI Lobby.

Inside there is an eclectic mix of antique office technology. Typewriters share desk space with early IBM-like desktop computers and dot matrix printers.

A close up of one of the typewriters in the opening credits suggest they are using at least one IBM Selectric product with the distinctive "golf ball" type head. This is particularly interesting in the context of the show because the Selectric typewriter was one of the earliest devices used for "keyboard logger" spyware during the cold war.

Between 1976 and 1984 spies working for the USSR successfully installed "listening" devices in 16 Selectric typewriters at the US Embassy in Moscow. The devices monitored the movement of the keys, compressed the data, and sent it out in bursts to waiting receivers.

It is as yet unclear why the OI employs such unusual technology.

The agency's website is currently offering a test for job applicants in an effort to recruit new employees.

"The Office of Interchange is seeking dedicated employees who wish to pursue a rewarding career in the civil service. We offer competitive pay and full survivor benefits. To determine if you have the proper qualities necessary to fulfill our organization’s unique mandate, you will be given a battery of mental and psychological tests. Should you pass the tests for all five levels, you may be contacted regarding a full-time position." 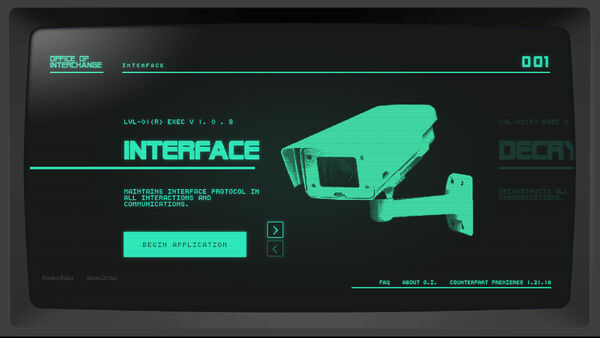